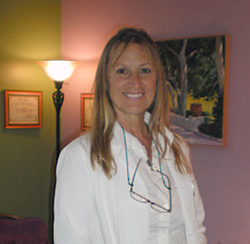 After earning her BS in Marine Biology from Southampton College in New York in 1987, Sally spent the next four years conducting research on marine mammals and in biochemistry at the University of California, San Diego.

In 1993, Sally received her degree in Oriental Medicine from the American Institute of Oriental Medicine, studying with Dr. Yitian Ni, a master acupuncturist who was the 30th generation of Chinese Medical Doctors in her family. After graduation Sally worked and studied in Dr. Ni’s clinic for an additional five years and has also received Dr. Ni’s two year certification in gynecology.

In 2019 Sally received her Doctor of Acupuncture and Chinese Medicine from the Pacific College of Health and Science thus fulfilling a lifelong dream.

Sally is California Board Certified and Nationally Certified with the NCCAOM, (the National Certification Commission for Acupuncture and Oriental Medicine).
​
A member of the National Acupuncture Detoxification Association, Sally has worked in numerous drug and alcohol rehabilitation programs as well as working with dual diagnosis patients at the Shepard Pratt Psychiatric Hospital in Maryland. In 1999, Sally started the acupuncture detox program at the Kaiser Permanente Chemical Dependency Recovery Program in Oakland. Sally has also volunteered extensively with HIV and Hepatitis C patients.

Sally has specialized in gynecology and infertility (female & male, with or without IVF. ) since 1993. She has worked at Shady Grove Fertility Clinic.